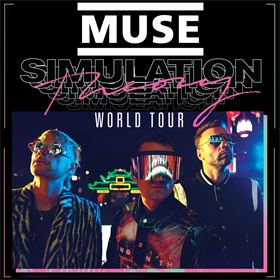 It’s Muse’s neon night world, we’re just ready to rock in it. The veteran trio will drop their Simulation Theory album this Friday (Nov. 9), and now they’ve announced the first tour dates to support the album.

Muse have certainly wowed fans with their series of music videos in the lead up to the album’s release and as you might suspect from the clips and the album title, there will be an enhanced experience package that fans can partake in during an exclusive Mixed Reality Pre-Show party.

Powered by Microsoft, there will be a trio of original virtual reality games inspired by tracks from the album. There’s also additional enhanced experience perks including a premium concert ticket, a show specific power, an interactive photo experience with props and memorabilia from the videos and more.

In addition to the North American trek, Muse have also revealed the dates for a European tour leg that kicks off May 26 in Prague and wraps July 26 in Madrid, Spain. See all of the dates listed below, and stay tuned as more dates are expected to be revealed at a later time.

Muse are pleased to announce the 2019 Simulation Theory World Tour!

Official Store pre-sale starts Tuesday 13 November at 10a local. Codes will be delivered via a separate email on Monday 12 November.

Members section pre-sale begins Tuesday 13 November at 1p local. Please note you will need to reset your password to gain access to the new Members section.